The European Year of Skills on its way 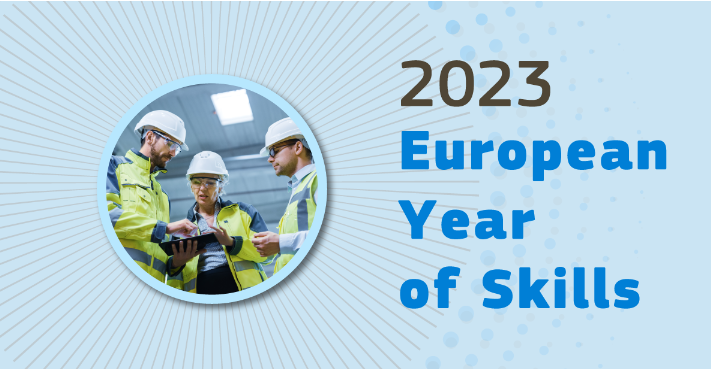 On 13 October 2022, the European Commission adopted its proposal to make 2023 the #EuropeanYearOfSkills, following the announcement by President Ursula von der Leyen in her 2022 State of the Union address. Mr von der Leyen stressed in her speech that Europe “(We) need much more focus in our investment on professional education and upskilling.”

As mentioned in European Commission’s Press Releases, with the European Year of Skills, in cooperation with the European Parliament, Member States, social partners, public and private employment services, chambers of commerce and industry, education and training providers, and workers and companies all together, the Commission proposes to give a fresh impetus to lifelong learning by:

EARLALL and its members are actively supporting the European Commission’s initiatives on all these topics through the implementation of EU projects on upskilling and the twin transition (such as SMALEI, LCAMP or Neets for Neets), by cooperating with the European Commission through initiatives such as the Pact for Skills or the European Alliance for Apprenticeships, promoting initiatives and discussions on the inclusion of women in VET and Lifelong Learning sectors (together with other organisations such as EfVET, EAEA or Lifelong Learning Platform) and youth empowerment. Furthermore, EARLALL will continue to work on this topics in the coming year.

We support the words of Commissioner for Jobs and Social Rights, Nicholas Schmit, who said that “Skills mean jobs – quality jobs. During the European Year of Skills, we have an opportunity to connect the dots between labour market-oriented training and labour shortages. To make sure that the transition to a carbon-neutral economy is truly fair and inclusive, we need massive and immediate investment in people’s skills. I am confident that having 2023 as the European Year of Skills will have a significant effect in pushing forward the skills revolution we need in Europe.”

A good opportunity to start working on the European Commission proposals would be the “2022 Forum on Vocational Excellence – “Global partnership for Vocational Skills” which will take place on 15-16 November, online and in San Sebastian (Basque Country), and in which EARLL will participate.

The European Parliament and the Council will now discuss the Commission’s proposal, with the opinions of the European Economic and Social Committee and the Committee of the Regions taken into account.